After a year of publication, and a summer of lots of action in the Roca Verde regions, there’s plenty of new routes to report and updates to existing crags.

All the areas in Roca Verde are vibrant, active areas with plenty of people adding new routes and new sectors and even new crags: more on that to come.

So, to keep my readers abreast of the new routes I have added a new section to the site where I’ll be publishing updated topos/croquis to some of the sections in the book, as well as topos to new areas.

And to start you off here’s an example of an updated topo for the small sector of Bordillo at Marabio…we climbed there today and nearly all the routes are worthwhile and the two new short 6b’s pack a real punch!!

So thanks to the people who re-equipped and added the new routes! 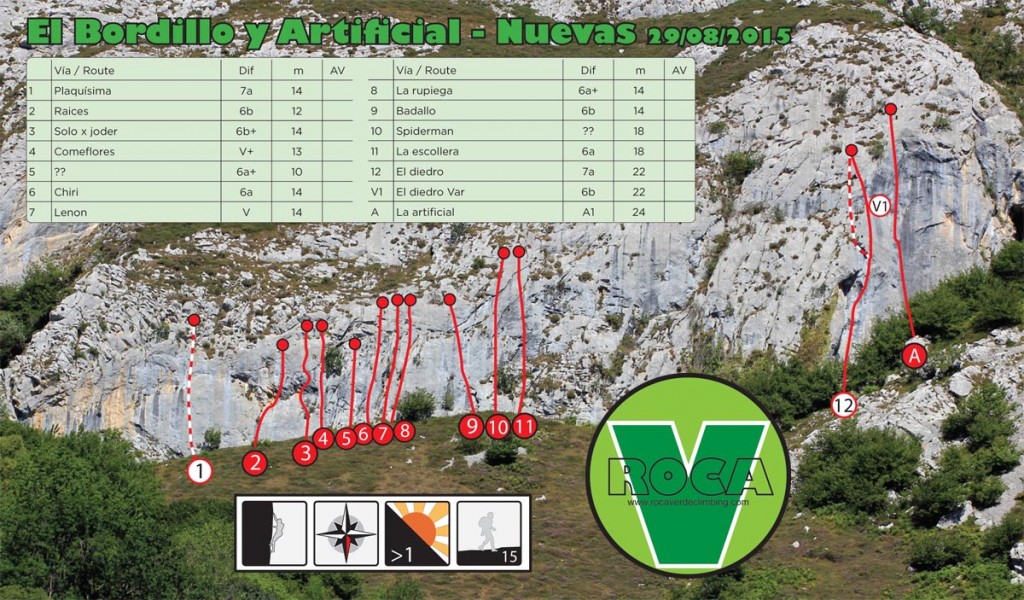 And remember Roca Verde with it’s bolt fund helps to provide gear for the people who give their time to these onerous duties: see more at our Bolt Fund page…

Roca Verde’s made yet another appearance in a European climbing magazine, this time in the UK’s Climber Magazine.

Based around the climbing in La Hermida it takes a look at the main crags there and what you need to know if your planning a visit to this mini climbing paradise close to Santander.

All included in the Roca Verde guidebook the La Hermida valley is a great destination combing a host of grades and styles of climbing to complement most parties.

The article runs to 8 pages with lots of great photos and is available in the UK until the 10th of September.

You can download a ‘rough’ copy of it here to get a flavour:

After having a bit more free time I have started to make some short videos about the climbing in Roca Verde territory.

Here’s the first one I’ve done – it’s me on one of the super cool routes at the Sector Las Ardillas, at the crag of Quiros in the heart of Asturias.

I’ll be making plenty more videos from now on – and hopefully learning more on the way – and you can see more at my YouTube channel.

I’ve also started to collate as many videos about Asturias as possible in one place so you can see what else there is on offer.

There’s about 30 videos that I have found – of varying quality – that show some of the climbing in Asturias and beyond.

For once Placas del Sol didn’t live up to their name. A light blanket of cloud in the afternoon made the day, although hot, very bearable turning this latest visit into my longest session at the crag.

I had joined a couple of guys who were staying in Casa Quiros after they’d chosen the crag to make the most of the morning shade. With a pretty impressive plan of starting at Placas then going on to Planeta X I was psyched to meet up and climb with Conor and Sean.

I had recommended Placas for its brilliant routes, general lack of traffic and the fact that it’s always shady until about 1.30.

Being Brits Conor and Sean were already stuck in to the ‘warm-up’ when I arrived promptly (well just after 10), though to be fair they’d had 10 minutes drive from Quiros while I’d been an hour in the car. Psyched I stomped up the hill and arrived out of breath just as Sean descended, so I tied on and scooted up the ‘Minimum’ 6a+ for the third time.

They’d both enjoyed this tricky, but fun, slab and, enjoying being ‘ringmaster’ I set them off on the next route, the beautiful groove of ‘Empezamos bien’ 6b+. They were both pretty keen, Conor going first, and although I warned him about the thin, techy start he got out of sorts and slumped rather inelegantly onto the rope.

‘Drat’ he said (I may be paraphrasing) then got back on and scooted to the top. Mood improving as he really seemed to enjoy the delights of the climb Conor topped out happier. Sean’s more measured approach paid dividends and he ascended pretty smoothly making light work of the start and only pausing briefly in the middle section. I followed and doing it for the third time still found the start hard, but got up OK.

Next it turned out to be sandbag time as I set Conor off on a pretty brutal 7a+ called Ojos caprichosos…I’d been pretty much spanked on it but presumed Conor leaner physique and lack of years would triumph…Hmmm, not be. Equally chastened on the grim pocket pulling start Conor quickly bagged it off and we retreated to the more favourable angle of Distrito Apache a very good 7a on the first buttress

Having done it before I put the clips in and watched as Conor managed somehow to drop it on the last few moves (actually understandable as it’s a bit thin and unobvious) and then Sean ‘suaved it’ afterwards for a pretty good flash.

It was my turn to actually put some effort in next and I was desperate to slay a mini-nemesis in the shape of Karicaturas, 7a+, a brilliant pitch which takes a very blunt tufa to a challenging headwall and move that had repelled me about 20 times on the previous go. This time went better on the tufa below, which is remarkably sneaky, and I was fully psyched to make the move above, though very pumped, and caught it spot on; latching the crozzly crimp well enough to get through. Very pleasing.

After that Conor decided to finish Distrito and smoothly sent it while Sean dozed beneath…it was packing up time more or less when i was suddenly shocked by the fact that a route I had always fancied – that took a great line through a roof was actually a 7b not a 7c.

So sod it, off I went on an ‘eyes bigger than belly’ on sight attempt and after sending the first roof with a lot of effort I found myself in a ‘no-mans land’ trying to rest in a  big hole. Not getting any less pumped I decided to soldier on and little by little with some big pulls and breathing like a cow giving birth arrived under the top roof.

Just one move to go and I would have on sighted my first 7b of the year – only a week after doing my first 6c of the year!! Gingerly i flet round the roof and at first couldn’t find anything, but, calming my breathing and looking a bit harder a small slot appeared and I was able to grab the top jug.

This was a very good day out and for once as the placas didn’t live up to their name and frazzle us after 2pm we could have a full day there and enjoy everything it had to offer!