It’s been about two weeks since I started Tom’s program and I thought I’d give it all time to breathe before I put down my thoughts about my first ever training plan.

I had made my challenge: to climb 8b+ before I turned 50 (giving me a year) and Tom Randall (maybe out of pity) had agreed to help. So I dutifully turned up at his Lattice board training facility and put myself through what turned out to be a pretty gruelling test.

So when Tom handed me my plan about a week after I my test I was initially a bit taken aback…there were reams of paper and those kind of things I normally back away from…but also there didn’t seem that much to do. So I played at it for a day or so getting my head into gear – seeing how the facilities I had matched up to the program; trying to get used to the idea of being indoors a lot more that I had been and looking at my week and planning (something I’m not great at!).

Then came the phone call: I needed to clear a bunch of stuff up with Tom and after leafing the sheets and doing a few of the exercises i had some (as they turned out to be) stupid questions!!

First question: ‘After I finish my day’s set training can I train?’

Now this may sound like a stupid question but I after I had done the first exercise on the list for ‘Conti’ I wasn’t tired…so what’s a boy to do?

Train hard…that’s the thing isn’t it, get trashed…go home tired!! The answer…a resounding no…’We’re building a base, you need to get the basics in place before  you can get onto the strengthening and power sessions.’ 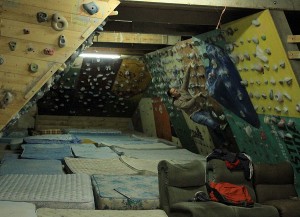 Second question: ‘In which case can I go and try my projects’…
A sigh and a second ‘No’ and ‘We’re building a base…etc etc etc’ Then the concession…’Ok you can climb but only up to 7a/7a+’…and then gently – like he was talking to a small child rather than a 50 year old child – ‘Richie, we’re building something, we need to lay the foundations…if you’re body isn’t ready when you try to train hard it’ll fall apart…sound familiar?’

And it did sound familiar, the tearing of fingers, the tightening of muscles leading to spasms which stop you for a week…or two…the distant memory of various physios marvelling at how my twisted and knotted body still functioned…

Let’s see how that goes…!