You are here: Home / Archives for richie patterson

In the end my results from my bruising test (see Blog here) were delayed a bit longer as Tom and I went down to the Schoolroom to talk to Ben Moon and for Tom to have the chance show me a few key exercises on the TRX etc before I had to head back to Spain.

It was interesting to hear Ben’s take on it all. He’d been in the same position as me about 24 months ago – getting himself up off the sofa (not literally like me) to jump right back into the world of hurt that is top-end climbing. Ben being Ben he ended up with a 9a ascent. Slightly more than I was aiming for and his grade jump was probably less than mine but in a lot of ways I felt that what he’d done was similar.

His take was very simple – he loved it and he missed it and because of that it was no hardship to start training. Ben had always trained and trained hard – and methodically. This time was slightly different as he’d approached Tom to try and get him an edge: his goal was in sight but eluding him, could Tom’s input give him the vital few % that he needed?

Naturally Ben loved training and so he wasn’t phased by the work; Tom had added some volume and he was struggling with time but his advice to me was simple – enjoy it and put the time in and you’ll see the rewards. As he knew me well he also added the caveat of avoiding injury and taking it steady – he’d seen my ‘bull in a chinashop’ personality up-close a few times and was keen to point out that slow and steady wins the race!!

Another smile, another hesitation, and another slightly embarrassed silence followed (much like that of Steve McClure); then Ben, sounding like he was trying to convince himself, came out with an elongated ‘Yes’…a yes which to all intents and purposes sounded like a no…However, Ben did firm his yes up and was a bit more positive but repeated the caveats of injury and overenthusiasm before tailing off.

I hadn’t climbing with Ben in 15 years so it was great watching him in action again, seeing how much effort he put in and as ever he was strong and smooth on the board as he sent a set of intervals. Jealous!

Heading back to Tom’s I sat about as he fiddled the figures eventually pulling up my ‘dashboard’ – a summary of my results in the form of a series of ‘speedometer’ like dials. Tom smiled as I looked at them, realising by my face that I was pleased with how they looked but had no idea what they meant. 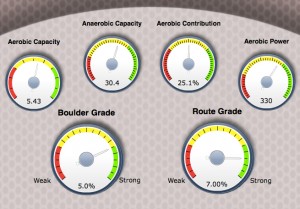 I asked him to help – and to summarise for a layman. Cracking a smile he told me that the best summary was just to say that the results were better than he thought the would be and that, in his opinion I had the basic materials in place to climb around 8b/8b+ with a bunch of training. There was no obvious weakpoint, no trapdoor, which my body had set – even my stamina which I thought of as terrible wasn’t that bad.

Happy, surprised and  and psyched I felt some relief too. I had thought that I wasn’t so bad that I couldn’t get back there but it was good to have it confirmed. Flushed I pushed Tom for his view on my chances; and he said that I could do it.

Pushing harder I asked what chance he’d give me, ‘put a number on it’ I said – unblinking he thought for a minute and softly replied 25%…

Old Dogs New Tricks – The 8b+ Challenge – I am a 49 year old climber who is trying to better myself by trying to climbing 8b+ from my carrent grade of 7b+ in the year before my 50th birthday.

Wow…The hottest day of the year, a very unusual March day of 25 degrees, and I’m sweating my way up the 40 minute walk-in to Cerro corona. The imposing butress overlooks the town of Carrena in the east of Asturias and is one of those places you look at, say ‘wow’ yet never seem to get round to going to. 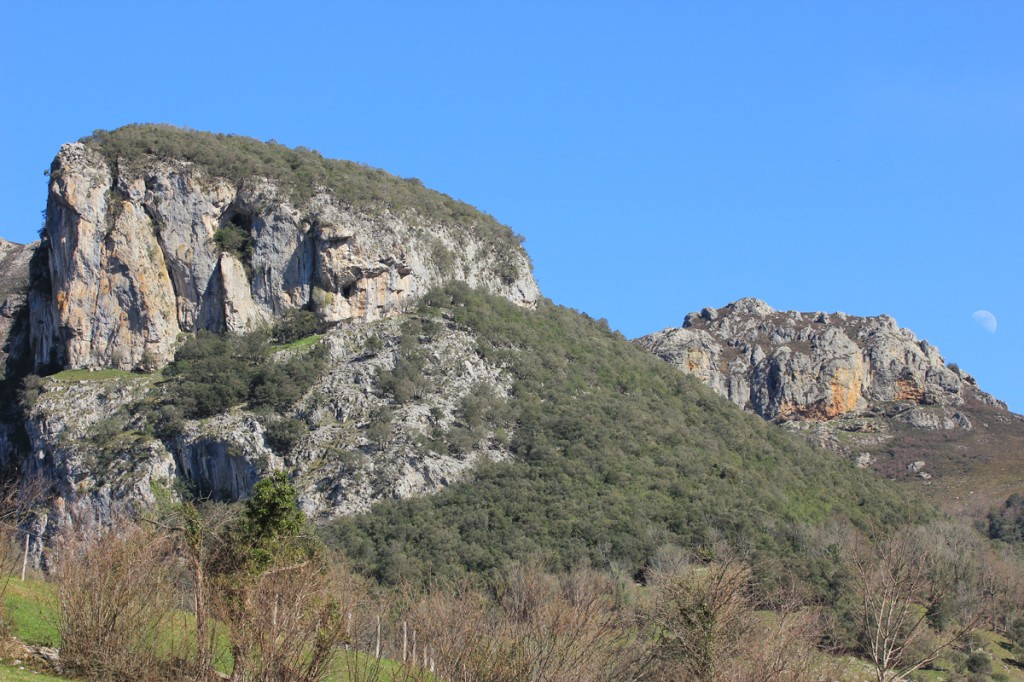 We’d planned this day for a while and we got lucky as although it’s  hot the light is amazing and as this shot from the valley opposite shows even the moon wants to get a suntan.

Cerro corona is the crag on the left and as you can see the walk in is steep and tree covered and long. It’s left me a bit drained – and maybe that’s why i get so pumped on the warm up. This long and involved 6b,  Fistro de diedros, is 26 metres of technical grooves and hard-to-see holds on perfect rock.

The sun beats down as I look for a spot to take some photos from. I finally find a place up a tree and we get to work. In the full sun the route looks tricky but also looks amazing set against the backdrop of the Picos with Picu Uriellu standing out behind.

First go I don’t get the light right but the climber doesn’t get the sequence either and so half an hour later I’m back up the tree. This time he sends and so do I  and we have our shot for the guide, epitomising the amazing climbing and magificent scenery encountered climbing in the Oriente of Asturias.

Both baked, though him more than me, we sit in the shade for half an hour until it’s my turn. Luckily I send first go and we pack up, job done and head down…only to be confronted by a final treat, the Picos ‘in full effect’ staring us in the face as we descend! 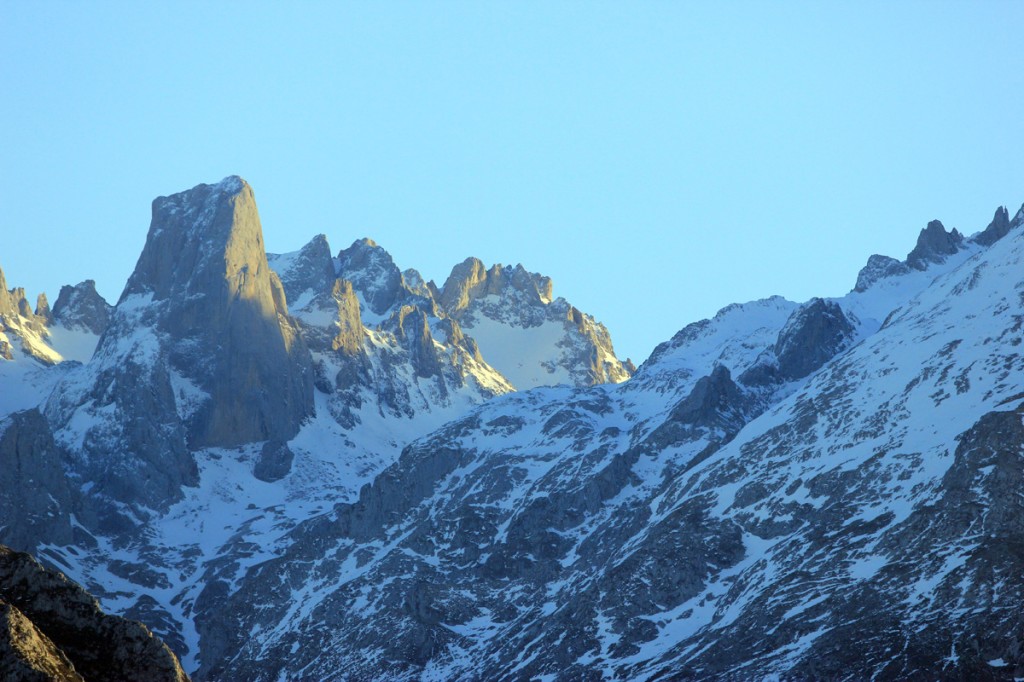