You are here: Home / Archives for Vias nuevas 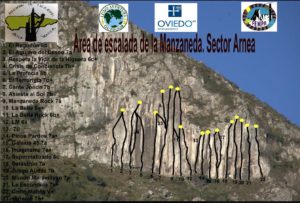 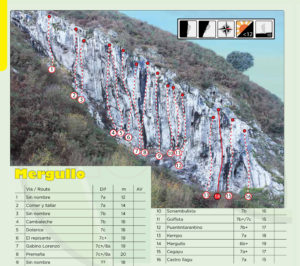 Happy new year everyone. As it’s now 2019 it would seem to be a good time to round up what’s been happening in 2018 and maybe a good place to start is the ever busy valley of Teverga. There’s plenty of new routes so I’m going to put them up in three posts…and the next sectors are also sectors that was mainly finished in 2017; La Falda and La Galeria.

These sectors in reality are an extension of Muro Techo – if you keep walking past the existing routes you will get to them in a minute more. La falda (the skirt) is the huge slab while Sector La galeria is the section of tough tufas which overhang the slab below. The routes in general are all quite intricate climbing and with a good spread of grades it’s a great place for a mixed ability group – it’s also worth noting that a 70m rope is needed for nearly all of these as they’re longer than they look. The routes in ‘the gallery’, La galleria, which start from the ‘salathe’ ledge are almost the exact opposite; short steep and generally quite brutal. They also put a bit of fear into the proceedings as, starting at 35 metres, the cruxes are at about 50 metres off the ground!!

Like always these new routes are never the work of a single person and so it’s easier to thank everyone who is usually involved in new routing in Teverga so thanks go to Lolo, Miguelín, Berto, Hectorín, Moss, Mulero, Gali, Raúl, Josete, Jose Camino, Armando, Cesar, Junior, Pablo Martín, Tino, Javi López, Mariluz, Pablo, Diego, Dani, Anselmo, Richie, Javi Garzo, Brillan, Espolita and anyone else who’s helped!! And remember if you do come to Teverga that all these routes are made possible by the work of the local climbing club so if you do stay in the parking area it’s worth remembering that you can make a donation at the club hut to help with bolts and bolting!! 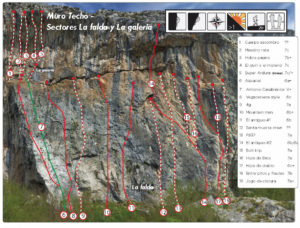